Sixth chords add the 6th note of the scale to a major or minor triad. We can therefore have a major 6 and a minor 6 chord.

These chords can be substituted for the major or minor chord itself, to add more colour, and are usually used in conjunction with the major and minor 7th chords.

Here are some examples of major 6 and minor 6 chords on the guitar: 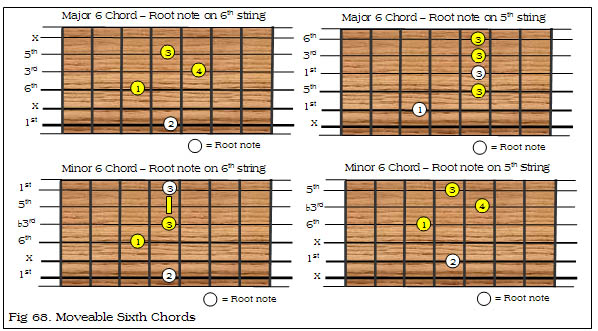 The following musical example shows the basic use of an open D (major) 6 chord alternating with a standard D major chord to produce a blues-type shuffle. This is very common in blues-based music.

This piece of music is actually the verse to 'Bad Moon Rising' by Credence Clearwater Revival, indeed many popular songs use the 6th chord in a similar way. The standard major chord alternating with the sixth chord creates a sort of blues 'shuffle'. Here, you can see the 5th note of the D chord is moving up to a 6th and back down again, creating a shuffle if played with a swing feeling.