There are two types of suspended chords, the sus4 and the sus2.

As the name suggests, these chords imply a sense of suspension of the sound, and tend to want to be resolved. These are useful preceding a resolution in the progression to create a suspended feel.

In both cases, the 4th or 2nd note replaces the 3rd note of the triads, so really they are neither major nor minor chords. However, they will resolve to the correct tonality when the major or minor chord is played following.

The sus4 chord consists of the 1st, 4th, and 5th notes of the major (or minor) scale.

The sus2 chord consists of the 1st, 2nd, and 5th notes of the major (or minor) scale. 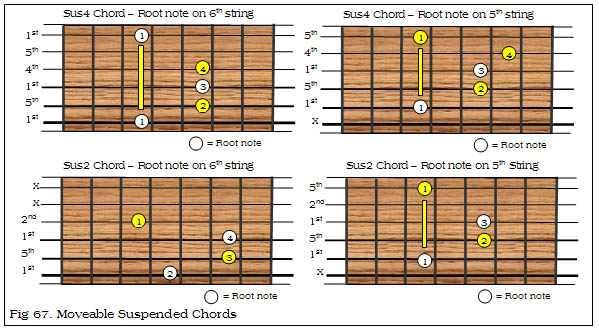 Open position suspended chords are also used with great effect. Play the following progressions and you might recognize it from some popular songs.

Suspended chord progressions like the one above have appeared in songs such as "Needles & Pins" by the Ramones, "Patience" by Guns 'n' Roses, "Absolute Beginners" by David Bowie, and many folk tunes.